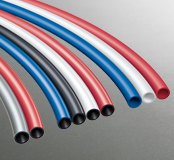 Our PEX tubing meets and exceeds strict standards within the plumbing industry for potable water. ViegaPEX is also one of the few brands that has obtained the PEX5006 (CL5) chlorine resistance ratings, allowing ViegaPEX to be
used in continuously recirculating hot water systems. 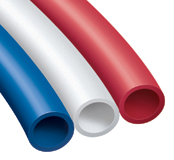 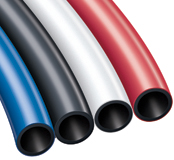 ViegaPEX Ultra provides exceptional protection against UV radiation from the sun for applications where tubing could be exposed to the outdoors for up to 6 months. ViegaPEX Ultra is also available in sizes from 3/8" to 2" for larger applications. 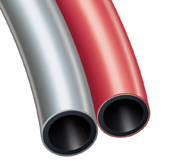 Fosta stands for Form-Stable PEX, so the piping will keep its shape after it is bent. A distinctively versatile product, FostaPEX balances stability with flexibility to create a unique tubing system that not only bends with ease but also holds its shape. Outer layers of aluminum and PE make this feature possible, while simultaneously extending UV protection. FostaPEX is a lead-free oxygen barrier pipe, which makes it compatible not only with potable water systems but also in hydronic applications. FostaPEX also has a low coefficient of expansion compared to standard PEX products and, since one fitting system connects to all types of ViegaPEX tubing including FostaPEX, distributors need only one inventory and contractors need only one tool set.
Viega began production of FostaPEX in November 2009 at the Viega Manufacturing and Distribution Facility in McPherson, KS. Viega’s FostaPEX production line in McPherson is currently the only multilayer production line in North America that produces pipe for both plumbing and heating applications. Viega FostaPEX is the only product on the market with a fully dimensional PEX tubing wall, allowing it to be used with the standard Viega PEX Press fitting system. Other PEX-AL-PEX tubing products require special fittings